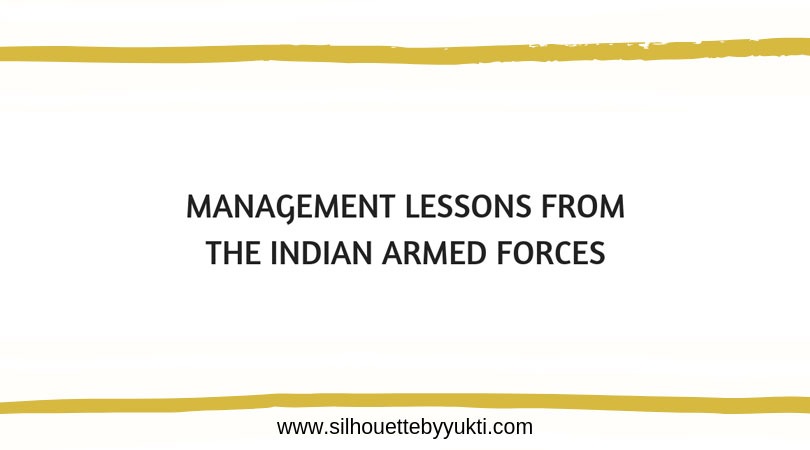 Don’t you think we often look for motivational pieces in the form of books, videos, or even podcasts? While they do help, they often fail to create a long-lasting impact. And how would they, when they talk about the Zuckerbergs?

So, instead of looking too far for anomaly examples, we decided to share some management lessons from people who practise them regularly (and can be found in abundance). This blog is dedicated to the Indian armed forces – Navy, Army, and Air Force. After going through these management lessons from the Indian armed forces, I promise, your Josh will be high.

In the Indian Cricket Team, the captain can replace or remove anyone in his team at will. But not in the Indian armed forces. A team leader in the Indian Armed Forces is assigned with a team – good or bad – and he has to deliver extraordinary results with that team.

No criticism, no blame game, only trust. They don’t have personal goals, they have one common target.

Leadership plays a critical role in achieving targets. Take for instance India’s Surgical Strike in Pakistan. Prime Minister Narendra Modi was very clear when he said that Pakistan should be responded in its own language. His decisiveness was quite evident from his body language (55%) and his tone (38%).

If you have a leader who is focused and decisive, achieving goals become easier for the team.

Confidence at the brink of failure doesn’t just make your brain avoid panic, but also motivate others. Have you seen the video of Abhinandan which is being circulated across social media?

In the video, we learn that Abhinandan – an IAF pilot – is a PoW held by the Pakistani Army. While he was being enquired, instead of showing fear, he answered (or chose not to) with absolute confidence. No drop in his confidence level whatsoever. That inspired millions of people in India.

In the Hindi movie Lakshya (which is based on true events) – a Subedar Major warns the lead protagonist (a lieutenant) about Pakistani army’s dirty tactic. During the denouement, we notice that the lead protagonist doesn’t neglect the warning and that leads to India’s victory.

We saw something similar in the recent blockbuster, Uri: The Surgical Strike. Also based on real events, the movie informed us that albeit the Prime Minister had to take the decision, he asked for and listened to everyone’s opinion.

Technology and manpower complement one another. If we don’t optimally utilize technological resources, man power suffers.

An ideal example of this point would be Garuda – the bird-shaped drone. India invented and used Garudas to record the exact location of the targets and notify the army about any potential danger during the 2016 surgical strike in Pakistan. It came out to be so critical for the mission that without them, they might not have been as successful in their mission.

Pretty much every day, I come across people who don’t value time. Many people have a preconceived notion that a meeting scheduled to be held at 11 a.m. will start after 11:30 a.m. An attitude like that stymies growth.

Do you think the Indian armed forces function the same way? They don’t. If the reporting time is 1100 hours, they will be there at ‘T minus 5’.

Care for your team –

Care for the people who work under you and that will help the team achieve excellent results. When one knows that one’s manager has got one’s back, one’s confidence level increases exponentially. Put your faith in them and they will rise above the challenges.

Pick up any war film based on the Indian armed forces and you will realize how important this overlooked management lesson is.