ONE NATION, ONE LANGUAGE? 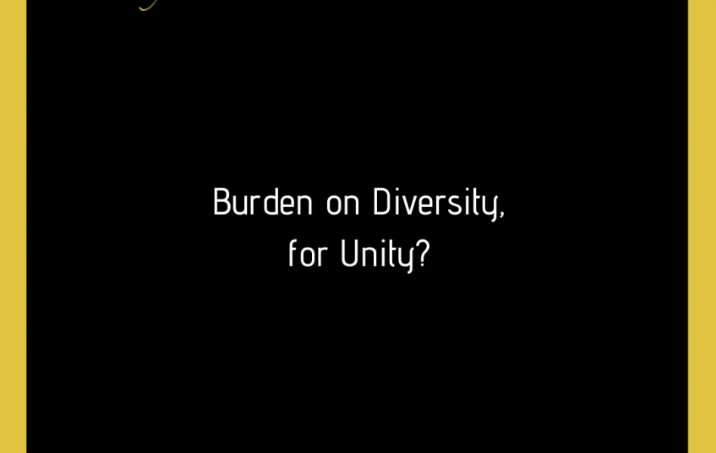 The recent debate triggered by our Hon’ Home Minister, Amit Shah, on having a national language got me thinking if this should even have been a debate in a secular country; if such a debate is a good sign or a bad news?

Albeit the topic of language in India often evokes emotions and references to Nationalism, Regionalism, Colonialism, and/or Macaulay-ism, it is to be noted that this challenge is not unique to India.

While we take pride in the diversity of our spoken languages, we are not No. 1 in this area. Interestingly, there are countries where more languages are spoken than in India:

In India, 460 languages are spoken (used to be around 780 languages, but about 320 languages have disappeared in the last 50 years).

In a nation which has more than 450 languages, with 22 of them being constituted as national languages, there is still a communication barrier. While Hindi is the most common language used in India, it is not even spoken by half of the total population. As a matter of fact, Hindi is spoken by roughly 40% of our country’s population. So, is it right to conclude that Hindi is our primary language? Not to forget, we live in the era of globalisation.

Should Hindi be learned by every Indian?

The Indian subcontinent has six different language families, one of which is Indo-Aryan (the parent of Hindi, German, Greek, and Sanskrit). In the map below, only the region in the yellow shade speak a language that is related to Hindi in some ways. 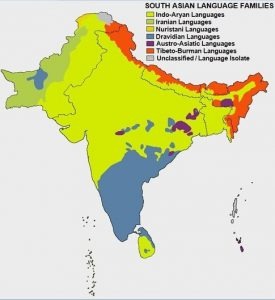 As can be seen in the map, the primary languages spoken in South India belong to completely different language families and hence it is quite difficult for South Indians to learn Hindi in a way that a Punjabi, Bengali, or Marathi could. Funny thing is, it would be easier for a Bangladeshi, Nepali, or Pakistani to learn Hindi compared to a South Indian.

Now, why should we force 60% of Indians to learn Hindi or any other Indian language that is not their mother tongue? And if there is a need for every Indian to learn one common language, why not English be the one? It is, after all, something that can connect every Indian with the rest of the world. Oops! Did we just trigger another debate?

Indians are better suited for globalization

When you visit Europe or North America, you’d notice Indians at ease in migration. The Indians in the US universities feel more at home than any other national group. That is because we are exposed to incredible diversity at home itself. Even if you have to move from New Delhi to Chennai, you have to get used to a new language and system. This means, we have already learned the adaptation skills at home.

Let’s face it – Japan, Germany, and even China have far better infrastructure than India has. Japanese were leading the era of computing until the 90s. And then, India came from nowhere and we are now a leader in global services withscant infrastructure

If we had followed the one language policy, we wouldn’t have created as many opportunities for ourselves as we have. Since we were made to learn English, to even speak to our neighbourhood friends, we got adept in the lingua franca of services. Also, the multi-tongued capabilities are a big plus. In an advanced world of globalized services, India already has an upper-hand that we pulled off even with a shanty education system & a terrible infrastructure.

There’s a reason why the CEO of Google, Microsoft, Hotmail, etc., are Indians.

There’s also a reason why Dr. Kalam, in spite of coming from a not-so-affluent family, chose to pick English as his 2nd language.

But who are we to judge?

So, we launched a platform called #TuesdayTalksWithSilhouette and opened this debate to our entire online community, asking them for their views on this: 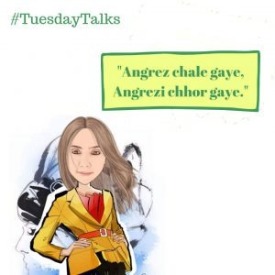 Here’s a quick sum up of the views we’ve received on the topic – Is English a foreign language?

No one believes that English is a foreign language (sigh). The fact that it is widely accepted across the globe makes it an essential language and helps us connect globally.

One person made a very intelligent point saying that, considering we live in the digital age, it is a necessary language if one wants to establish an online presence (including on social media).

The interesting point that was made was that it does provide more opportunities. A lot of us wouldn’t be where we are if we hadn’t taken up English – by choice or by chance.

Here are our two cents on this long-drawn debate – Language was created as an evolutionary development for humans to upgrade themselves from their ape-ancestors, so we could share ideas, views, thoughts and opinions with each other.

Over a period of time, the many variations of it is only a sign of how that evolution spaced out in different parts of the world. While having a common interface will help us to connect better but using that need as a means to disconnect from each other, is worthless.

So let’s keep language to its humble use to communicate and not use it to create judgements or sects.